Happy 2014! May this year be filled with new science and improvements in mechanical ventilation!  In 2013, nearly the same number of peer-reviewed papers were published (33 articles in PUB MED) compared to 2012 (35 articles). 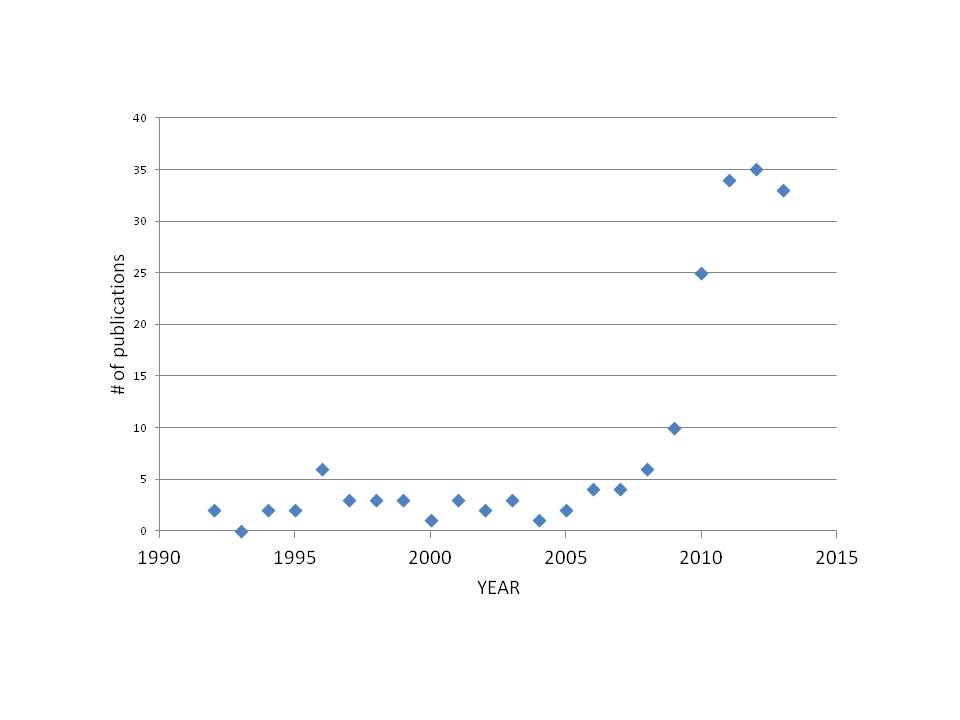 Over the last 20 years, the distribution of article “type” can be plotted as: 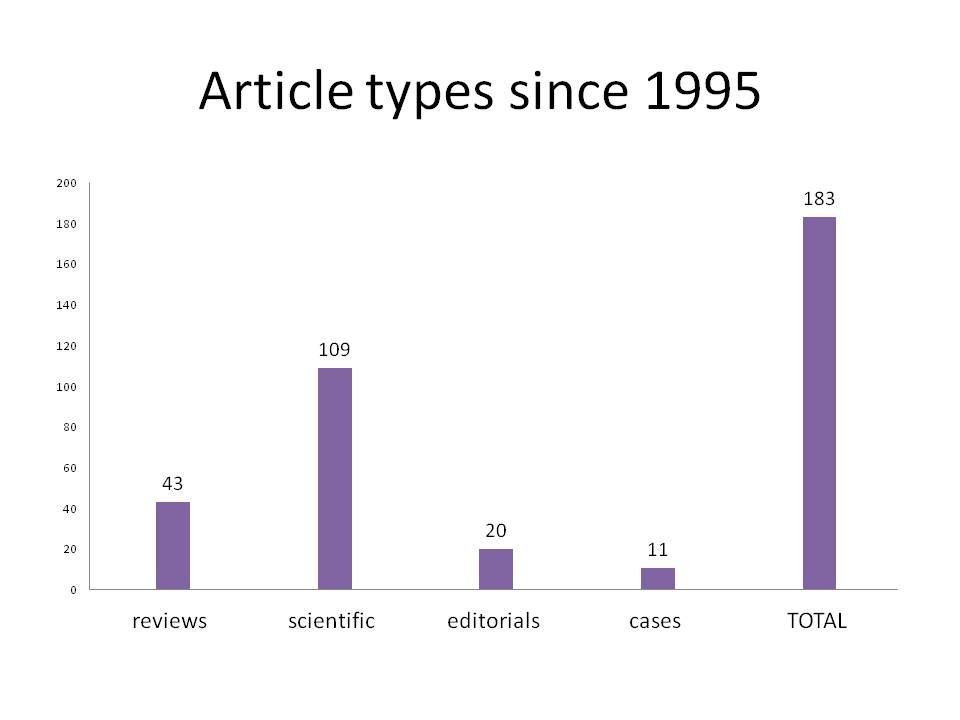 Edi and work of breathing: Bellani et al (CCM 2013) compared the amplitude (Edi peak) of the Edi waveform to the measured work of breathing (Pmusc) in 10 adult patients on mechanical ventilation at three levels of assist during both PSV and NAVA. Although the Edi/Pmusc ratio (an index of “neuro-mechanical coupling”) was found to be variable between patients, within a patient, the ratio was constant for different modes and levels of assist.  The authors concluded that the Edi was a valid index of global inspiratory muscle force, which confirms the findings of Beck et al from 2001 (Beck AJRCCM 2001).

Neuro-ventilatory efficiency and weaning: From University of Göttingen Medical School, Barwing et al (CC 2013) used the EAdi (combined with VT) as a monitoring parameter in eighteen adult patients that were having difficulty with weaning from the respirator. They performed a 30 min spontaneous breathing trial (SBT) with t-piece and 90% FIO2 and found a higher EAdipk (~26 mV) in the failure group, compared to the success group (13 mV).  The neuro-ventilatory efficiency (NVE), calculated as ml/mV, was significantly lower in the failure group, compared to the success group.  These findings confirm the results of two previous studies examining Edi and NVE as predictors of weaning success and failure (Liu CC 2012; Dres ICM 2012).

Neuro-ventilatory efficiency and weaning: Rozé et al, in The British Journal of Anesthesia (2013), also reported ventilatory and Edi parameters in 12 adult patients, undergoing daily SBTs (with PSV = 7 cm H2O, ZEEP).  If patients failed the 30-min SBT, they were placed on NAVA ventilation (NAVA level set to 60% of Edipk during SBT), and the SBT was repeated the subsequent day.  The process was continued until successful weaning was achieved.  Their analysis included the (daily) increase in Edi and the drop in NVE when patients were switched from NAVA to SBT.  Edi increased by equal amounts when switched from NAVA to SBT, regardless of success or failure, however, the drop in NVE was less for the success group.  Interestingly, looking at the change in Vt from NAVA to the SBT, Vt could be maintained in the success group, whereas it dropped significantly in the failure group.

Edi and tidal volume matching: Chiew et al (Biomed Eng Online 2013) studied the relationship between the integrated Edi and VT, the so-called “Range90” index, during three different levels of non-invasive NAVA (NIV-NAVA) in 12 adult patients.  A low Range90 index is suggestive of better “matching” between patient respiratory drive and delivery of assist.  The NAVA level was set to the same peak pressure as during clinical PSV prior to the study (NAVA100), to 50% less (NAVA50) and 50% more (NAVA150).  Globally, NAVA50 was found to have the best matching of Edi and VT (albeit only in 7 of the 12 patients).  The authors also stated however, that NAVA level settings, based on their findings, are patient specific.

NAVA in prolonged weaning: In thirteen tracheotomised patients with prolonged weaning, Vagheggini G et al (Respir Med 2013) compared the physiological response to four different levels of PSV and NAVA. As the assist increased, the peak Edi decreased in both modes, however VT in PSV increased from 4.5 ml/kg to >6 ml/kg, whereas in NAVA, the VT at the highest assist level was 5 ml/kg. Neural respiratory rate did not change during different NAVA levels, but decreased with increasing PSV. Ineffective triggering was the same in both modes.

Edi values in neonates: In the pediatric and neonatal literature, Stein and colleagues (J Perinatol 2013) were the first to publish Edi data in non-ventilated preterm neonates (n=17) (only highflow nasal cannula, nasal cannula or room air).  Edi was collected weekly, up to 10 weeks.  The average Edi peak was 10.8 uV (range 3.8 – 18.7) and the average Edi min was 2.8 uV (range 0.8-7.6) and did not change with postnatal maturation.  No adverse events were reported with Edi catheter placement (similar to 6 other studies that specifically evaluated this, eg. Barwing, ICM 2009 or Duyndam, Nurs Crit Care 2013).

Note: Interestingly, as of the end of 2013, 24 studies (PUBMED) in 329 patients of all ages have shown that NAVA improves synchrony compared to conventional ventilation modes.  In the 17 studies (224 patients) that reported an Asynchrony Index, asynchrony was reduced with NAVA (26 to 5%, p<0.001).  19 studies in 301 patients of all ages report improved or equivalent physiological parameters.

NAVA in Pediatric ARDS and outcomes: Piastra et al (J Crit Care 2013) performed a nested study to compare the clinical outcomes in children ventilated either with PSV (n=20) or NAVA (n=10) after a period of HFOV for severe ARDS.  From HFOV, NAVA showed less of an increase in HR and blood pressure, showed an improved COMFORT score, lower PIP and PaCO2, and less duration on ventilation, than PSV.

Use of Edi for detecting Congenital Central Hypoventilation Syndrome: Both Rahmani et al (J Coll Physicians Surg Pak) and Szcapa et al demonstrated the use of monitoring Edi as a diagnostic tool in newborn infants suspected of having Congenital Central Hypoventilation Syndrome (CCHS), also known as “Ondine’s Curse”.   In both cases, the infants had recurring hypoventilation and oxygen desaturation; they were admitted to the NICU and were intubated and mechanically ventilated.  The Edi was measured in both children, and was found to be absent during sleep (and hypercapnia observed in the Sczapa study). Both centers subsequently performed genetic testing and confirmed CCHS.

Interference with Edi: Somers et al (Minerva Anesthesiol) reported a technical note, where electrical equipment (intra-aortic balloon catheter, a pacemaker and a heating device) could interfere with the Edi signal in the ICU.  The study demonstrated the importance of catheter positioning procedures.  One of the interfering devices has since been taken off the market.  Note that despite this single case of report of pacemaker-related problems, the use of pacemaker during measurements of Edi/NAVA has previously been reported as non-problematic in other studies.